Life is Elsewhere and Festival of Insignificance by Milan Kundera 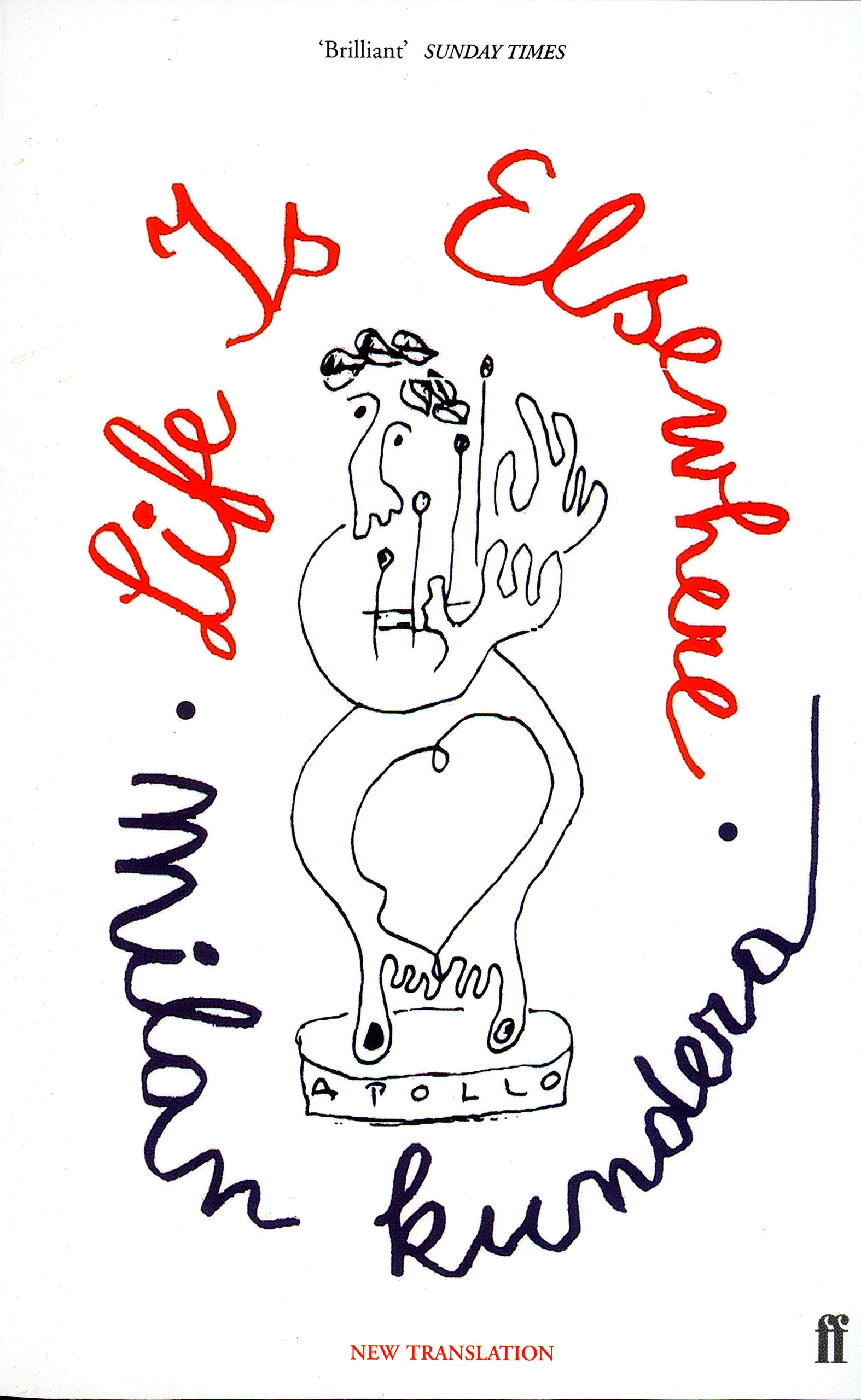 Life is Elsewhere is a very (bitter)sweet novel. It traces the tumultuous relationship between Mama and her son, Jaromil. Jaromil is the product of an unhappy relationship between Mama and an engineer who reluctantly becomes a father and husband. Throughout the early years, Mama alternates between her love for her child and resentment over a different future that was lost. She often overcomes this resentment by realising that her life is elsewhere: her beauty fading, her marriage is loveless but through her son she can live. Sometimes.

Kundera makes is absolutely clear that the only character that matters in this story is Jaromil. Most of the other characters are only ever referred to by description: the janitor’s son, the redheaded girlfriend, the painter. This technique reinforces not only the focus of the story but also seems to reinforce Jaromil’s own self-centeredness. Jaromil only cares whether the other characters like, admire or fear him. He doesn’t care about anything else. 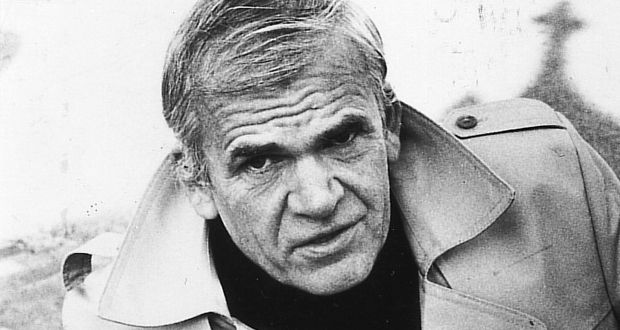 “You think that just because it’s already happened, the past is finished and unchangeable? Oh no, the past is cloaked in multicoloured taffeta and every time we look at it we see a different hue.”

History and memory play an important role in the story, as with all of Kundera’s work. The setting is mid-century Czechoslovakia and Jaromil witnesses the impact the war has on him, his family and friends and how Communist rule changes everything from his relationship with his family, to his friendships and even his poetry. As Jaromil grows up he becomes interested in women (which his mother resents because she feels that any love she has for them takes love away from her). As he sides with the revolution this relationship becomes even more fractious.

Jaromil is a brilliantly precocious poet capable of producing insightful poems from a very young age but he is constantly torn between his overbearing jealous mother, the political status quo and his own desire to write. His more sophisticated poems are often incongruous with the revolution (poems that are a product of bourgeois mentality) yet he latches himself on to the revolution as an opportunity to make a name for himself as a young man. Most of Jaromil’s downfall can be traced to him foolishly striving to be “manly”. It’s interesting to read this in today’s climate when discussions about toxic masculinity are ongoing though I doubt however that Kundera would see this as a part of that dialogue. What the novelist is clear about is that Jaromil’s jealousy, misogyny, arrogance and insecurity have been inspired by real cases. When Jaromil declares that love means ‘all of it means nothing’ and expects the ultimate sacrifice from his girlfriend, this is similar John Keats letter to Fanny Brawne: “You must be mine to die upon the rack if I want you.” Similar references are made to other poets such as Mikhail Lermontov whose ego in real life led to his death in a duel.

Throughout, the story is told from the view of Mama and Jaromil. In the sixth part of the novel Kundera comments how different the story would have been had he placed his writer’s “observatory” in another character’s life or in the future. How would events look if Kundera told us the events from the view of the redheaded girlfriend or the painter? A novel is restricted by its very nature. You can never explore every character, every viewpoint (although it feels like Dostoyevsky often tried his best to). As with Binet’s work I enjoy this approach to story telling. These postulations enhance the novel by giving us an insight into the author. Although I imagine such an approach might be dismissed by some as “post-modern”, damaging to the suspension of disbelief. But what is a novel? As Kundera says:

“Is a novel anything but a trap set for a hero?”

Perhaps the most bittersweet part of this novel is the convincing revelation at the end that life really is elsewhere.

The Festival of Insignificance 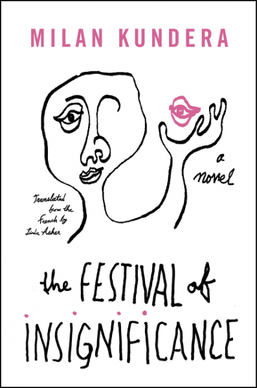 The Festival of Insignificance is a very recent novella of Kundera’s, published in English in 2015. It is Kundera’s lightest story and his most light-hearted. It is set in modern day Paris but the setting feels tangential.

It tells the story of a group of friends over seven parts. These are typical Kundera characters: unemployed actors, lotharios and liars, Oedipal artists. But the characters don’t really matter. They are at this point in Kundera’s life just a vehicle for his philosophising which he does on a range of topics from the rise and importance of the naval as a sexual region of the female body to the idea that no one consents to the life they are born into. And no one can consent to ending it without mockery or judgement.

Drawing on some ideas he discusses in his earlier works (Slowness) it also defies time. Alongside the contemporary characters is Stalin and his allies (Beria, Kalinin) who appear in increasingly absurd ways throughout the novella as comic figures. (Kalinin for example cannot go more a few minutes without soiling himself or running to the bathroom). The story ends much like Slowness, as Stalin and Kalinin walk through modern day Paris, mistakenly dismissed as underworked actors. Kundera here seems to be suggesting that the life he lived, the life he suffered through and the tragedies of Stalinism have been forgotten, dismissed by people today as insignificant events of the past.

The biggest philosophical moment comes in the last section with a thesis on insignificance. According to Kundera the most liberating thing in life is that everything is insignificant. Life isn’t elsewhere, it simply doesn’t matter. And Kundera sees a beauty in that.

As with Life is Elsewhere, Kundera explores the concept of observatories of life, positions from which we examine our own lives and each others (see above). However Kundera’s presence as a narrator feels less sublime than it does in other stories. He doesn’t give us any details on characters because they don’t matter for the purpose of this story. He repeats himself openly and his presence feels ubiquitous. The characters discuss Memoirs of Nikita Khrushchev. Why are they reading that? Because their Master told them too.

The role of the narrator is one of my favourite things about Kundera’s work but the Festival of Insignificance is too light a work to bear the heavy weight of its author. Had the story been longer, had Kundera had more chance to flesh out the characters (especially the women who make almost no appearance) then maybe his narrator’s touch would appear less forceful. But then again, I read this knowing it was my last Kundera. Maybe I just wanted a longer story so that I had more Kundera to read

So that’s it. I have now read every novel of Kundera. Not that anyone asked but if I had to rank Kundera in order of preference it would be: